The paper presents a new element of the periodic table D.I. Mendeleev number zero.This element is stable, in its natural form it is widely found both on Earth and inspace. It is proposed to call it UKRANIUM Ua0.

Among all natural catastrophes which take place on Earth, the greatest danger is caused by hurricanes/cyclones. Long-term studies conducted by the National Hurricane Center, Colorado State University, National Oceanic, Atmospheric Administration and many other groups [14], allow us to learn deeply the spectral and thermodynamic materials. But as there is no adequate model, the frontal attack on the hurricanes, adopted by “Storm Fury” and conducted for twenty years – from 1963 to 1983 – ended in a failure.

2.1. Problems of the thermodynamics model

Extensive research allowed us to investigate the causes and births of hurricanes zones, their height and ways of movements, to describe their structure and dynamic. These “pricks” for a whirlwind energy which is about 1017 J with a frontal closeness about 100 J/cm2 were rather weak. Atlantic basin seasonal hurricane investigations allowed us to build a capable working model of prognoses of hurricanes appearances.

As a result of wide research of birth, development, and fading of hurricanes, the  volume of various measuring of physical parameters is accumulated. Repetition of data confirms their high truth. These results show that in hurricanes there are such processes which thermodynamics theory is not able to describe. We will specify them. Warm, dry, and transparent air in the eye of hurricane comes down from troposphere, becoming moist and cold near the surface of the ocean [47]. Moist and cold air rises from the surface of the ocean along the eye wall of a hurricane with an increasing speed creating here a tangential force to wind [33,34].

Hurricanes make highly charged electric clouds which can burst by lightings. Hurricanes rotate in opposite directions in different hemispheres, and the Earth magnetic field is opposite in two hemispheres. During the most studies, Gulf of Mexico hurricanes tend to migrate dominantly northward in the Earth magnetic direction field [48]. If the hurricane forms a giant system of magnets, this behavior seems to be logical.

The studies of hurricanes by a spectral technique (polarimetry, infrared and mass spectroscopy) have showed that the ruling material force make the warm water molecules become an energy source of hurricanes[18].

The informative reality theory describes the fact of the presence of magnetic properties in revolving water molecules. The rotation of positive protons creates a solenoid, as shown on figure 3. The informing reality process forms a giant system of magnets. Solenoids cluster along the lines of the magnetic field, thereby creating an anisotropic environment that changes the polarization of light, as shown on figure 5. It is possible to assert that the magnetic acceleration of the rotational motion of a water molecule creates powerful infrared radiation. It is known that this global atmospheric phenomenon is accompanied by an anomalous increase of intensity at the frequency of 22.24 GHz. It is the frequency of the rotational spectrum of the water molecule. Meteorological satellites work in this spectral range, as shown on figure 6.

According to the informative reality theory suggested by the author, the rotational motion of water molecules which have crossed the inversion layer in the eye of hurricane acquires a high speed. 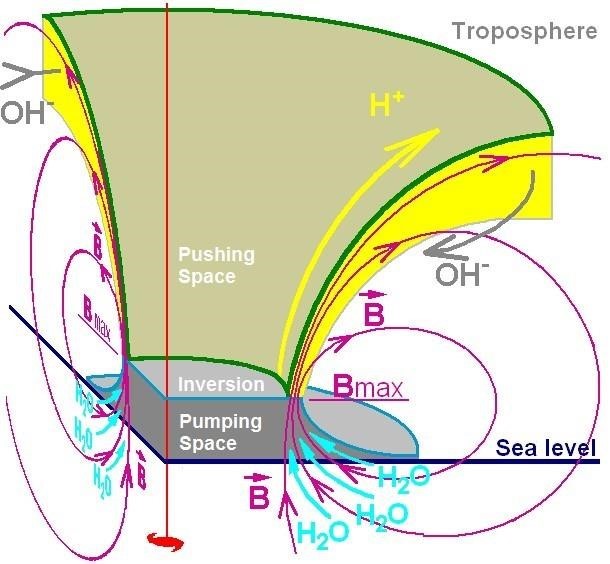 Centrifugal forces begin to exceed the valence bond and the Н2О molecule is torn into the Н+ proton and the ОН group. As a result, the energy of the rotational motion of the water molecule is passed to the tangential wind of hurricane. Protons are moved by the eye wall of hurricane to the troposphere and form a proton cloud there. This result is based on the mass spectroscopy detection technique, which was implemented on the shuttle Discovery in 1998, as shown on the figure 7.

The suggested informative reality theory exposes the nature of the self-formation of a hurricane, specifies its forces, and adequately describes its parameters.

Figure 4. Diagram of operation of the Hurricane Nano engines.

The centrifugal forces begin to exceed the valence bonding, the energy of which is 23 kJ/mol, and the H2O molecule breaks into an H+ proton and an OH- group. As a result, the H+ protons move with a velocity of 28 km/s in a clockwise direction, and the OH- group moves with a velocity of 5.3 km/s in the opposite direction. The energy of the rotational motion of the water molecule is transferred to the tangential wind of the hurricane.

Figure 5. View of a hurricane from space, with a cylindrical wall in the centre, which consists of Ua0. The ON- group, this is the cargo of the Nano Engine. It creates a hurricane wind with an initial velocity of 5.3 km/sec.

Thus, the hurricane eye wall consists of a hitherto unknown substance with the following properties: 1) it is a solid material with properties of metal; 2) it has the shape of a hollow cylinder; 3) the wall thickness is less than a

This is a new chemical element, which has its  place in the periodic system of D.I.Mendeleev in the first period of the zero group. Its valence is zero, as in noble gases. It is proposed to give it the name of uraynium Ua0.

The atomic weight of this material is less than hydrogen, hence it is an element of D.I. Mendeleev’s table with the number zero.

This material is a new chemical element which has its own place in the  Periodic system of Mendeleev: in the first period of group zero, see Fig. 6. 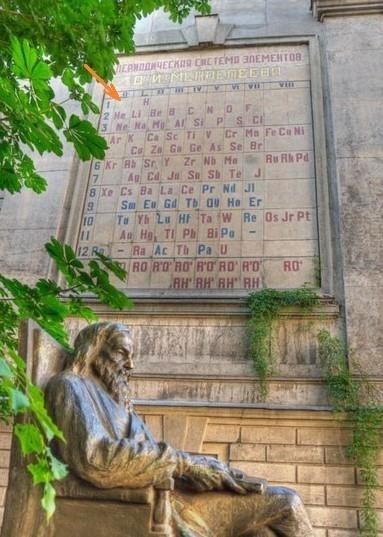 In “An attempt at a chemical understanding of the world ether” (1902), D. I. Mendeleev considers an unknown inert gas with an atomic mass equal to one, giving it a place before hydrogen in the first row of the zero group. According to Mendeleev, this element must be found in the Earth’s atmosphere, as shown by the arrow in Fig. 6.

For a long time, it was thought that an element with the number zero, like helium, was found in the Sun, namely in the solar corona. This was indicated by a band of intense radiation in the green region of the spectrum, which did not belong to any known element. It was given the name coronium.

However, coronium did not survive long in the scientific and academic literature. In 1939 astrophysicists Bengt Edlen and Walter Grotrian proved that the spectral line of 530.3 nm belongs to highly ionised iron (Fe13+).

Given that element zero was not found in the corona of the Sun, but was found in the Earth’s atmosphere, it is logical to give it another name: Ukrainium (Ukranium) with the designation Ua0. 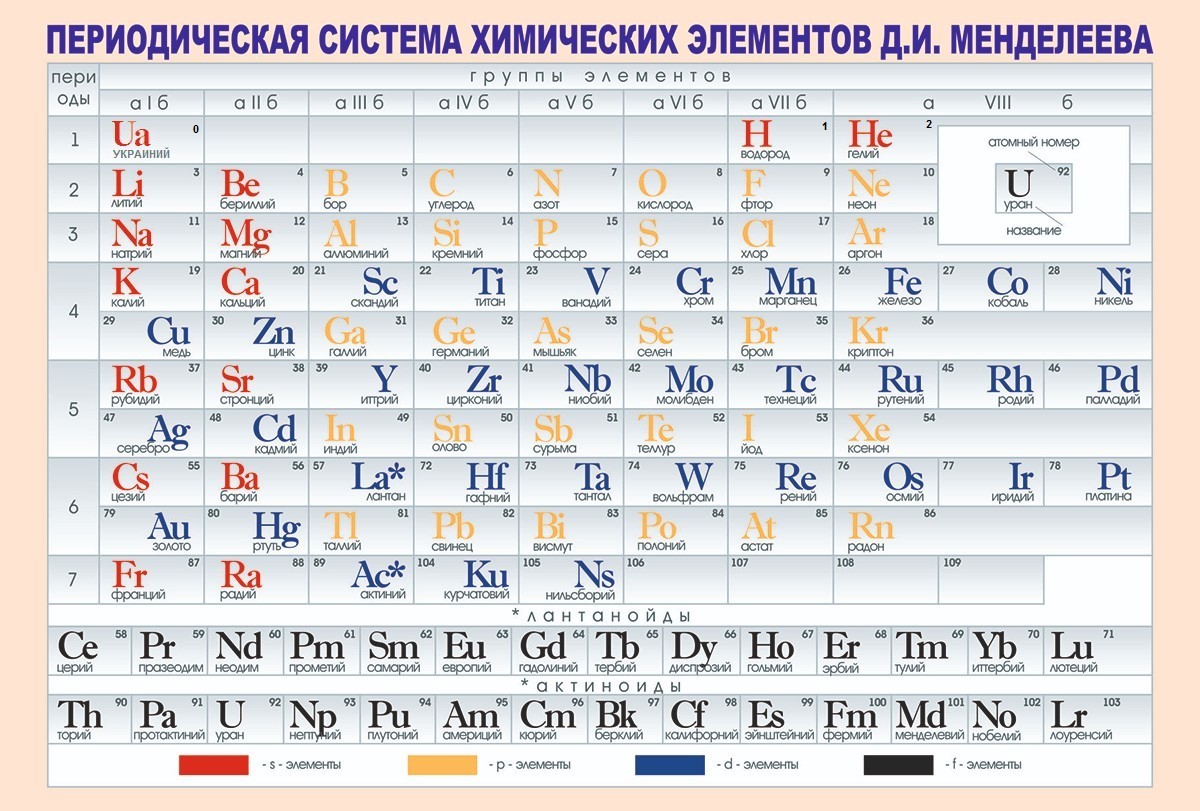 It should be noted that, in full order with the numbers of chemical elements in the table, a number of elements are assigned to groups illogically. For example, noble gases should not be assigned to group eight, but to group zero, as D. Mendeleev did, see Fig. 6. 6. This makes sense, because they have zero valence. Hydrogen is not in the first group, but in the seventh because of the coincidence of its properties with such gases as fluorine and chlorine. All of these gases lack one electron to a fully filled shell.

Because of this, it is logical to place uranium Ua0 in the first group, as it has the properties of a metal: it is solid and conducts current.

In conclusion it should be noted that Uranium Ua0 is a full chemical element, D. I. Mendeleev said that the zero element “cannot be in any way the world ether”. (Attempt of chemical understanding of the world ether. SPb., 1905)

The expounded informative reality describes spectral data as well as thermodynamic materials [18]. We will show this further. 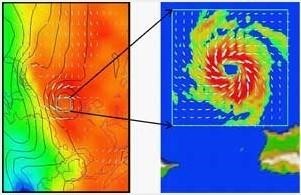 Infrared radiation. It is possible to assert that the magnetic acceleration of the rotational motion of the water molecule creates powerful infrared radiation which is marked in figure 6. It is known that this global atmospheric phenomenon is accompanied by an anomalous increase of intensity at a frequency of 22.24 GHz. It is the frequency of the rotational spectrum of the water molecule. 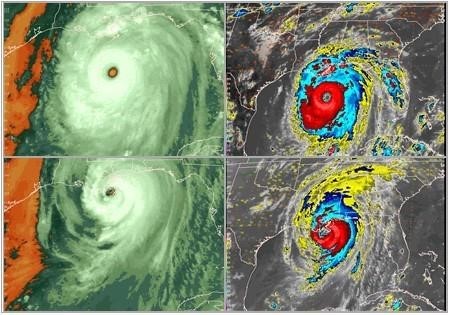 Figure 6 demonstrates hurricane Katrina in infrared spectral range at the frequency of 22.24 GHz, when it moved above warm water in the Gulf of Mexico. It allows us to consider the following two scenarios. Figure 6a shows the infrared radiation produced by the rotational motion of water molecules. Twelve hours later the eye wall was disrupted by interaction with the land surface, where the water molecules are absent. As a result, the infrared radiation above the land surface decreased significantly in magnitude, as shown in Figure 6b.

Mass spectroscopy. As shown in figure 4, protons move by the eye wall of hurricane to the troposphere and form proton clouds there.

This result is based on the mass spectroscopy detection technique, which was implemented on the shuttle Discovery in 1998 [24]. 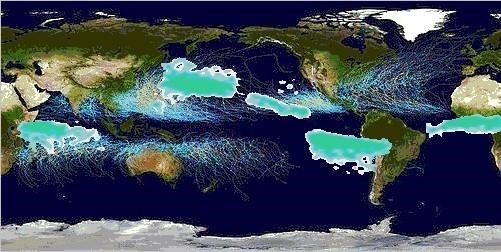 The location of protons clouds correlates strongly with the ways of hurricanes, which are given by points [40].

The informative reality theory allows describing not only spectral materials of hurricanes but also its basic dynamic parameters. 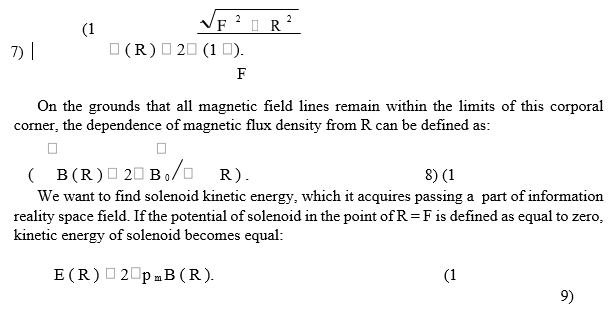 Taking the kinetic energy through the water molecules mass m and its speed V(R) on the equal potential surface of R, we can find that the resulting equation (19) in relation to speed, is [19]: 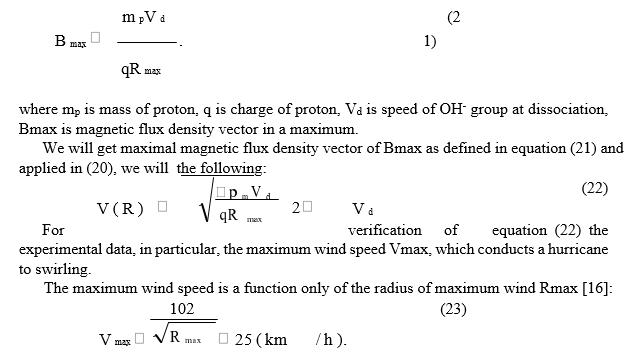